This piece attempts to make concrete sense out of the sensation that time is always speeding up — to visualize why the gulf between your eighth and ninth birthdays was an eternity, but each successive one has followed closer and closer to the previous.

This simple, tactile device is designed to translate between the classically defined time of watches and calendars and birthdays and the perception of time as we age. Classically defined time is represented by pins evenly spaced along a curve, where the distance between each pin stands for four years. A line descends from each pin to the baseline, which represents perceived time. While classical time appears constant, the perceived time segments get closer and closer together. Using the string, we can compare our calendar ages with how long that duration has felt. 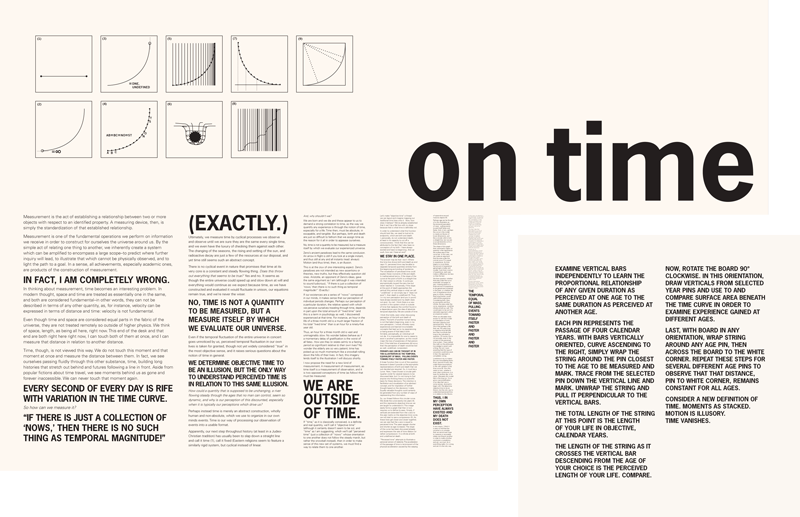 We usually accept time as a universal, immutable, and fundamental aspect of nature. We see it as a force external to ourselves, exerting itself over our world, our society, and our bodies. But the harder you look at it, the less reliably time behaves. How can you measure a distance (or duration) when both end points are moving and you can never observe both at once?

An arrow in flight is still if you look at any single instant, and thus it’s still at all single instants (thanks, Zeno). This suggests that instead of some steady, flowing river of time, we have a collection of “nows” that grows infinitely. Duration, or “temporal magnitude”, is an illusion. Time is not a quantity to be measured, but an intellectual construct, a measure itself by which we evaluate and derive meaning from our experience.

If time is internal to the observer, it makes sense that our perception of duration is variable. The strongest influence over this perception seems to be age. Perhaps, then, perceived duration is a function of total “lived time”. The more instants one has experienced, the shorter a duration feels. For instance, one hour of the life of a three-month-old is proportional to more than two weeks of the life of a 95 year old. No wonder delay of need gratification seems so dire to small children when the duration of delay is so significant relative to the total length of their lives.

I’m not a mathematician, scientist, or philosopher by trade or training. This is a simplistic embodiment of a thought-experiment, and it’s meant to facilitate a conversation and shed a small amount of light, but it’s not meant to be taken overly seriously.

evaluation
BACK TO TOP